‘Entrepreneur of the Year’, ‘Best Family Enterprise in Burgenland 2013’, ‘Councillor of Commerce’, ‘Superbrand Austria Award’  – accolades such as these demonstrate what an entrepreneur with vision and consistency can achieve. Leo Hillingers goal has always been that of making a difference in the world of wine. To be successful and to practice sustainability in the process. To give wine a young, dynamic, modern image. As an entrepreneur, to create an environment in which employees have the opportunity to bring their potential, know-how and creativity to life. And to set new initiatives in the region and thus contribute to general value. Leo Hillinger has received several awards for his work – and with it, for the philosophy he has been living for years. Because HILLINGER is more than wine!

This international award was followed by others in Austria: in 2013, Leo Hillinger GmbH was honoured by the business publication WirtschaftsBlatt and its partners Bankhaus Spängler, BDO Austria and the Notary Chamber as Best Family Enterprise in Burgenland. This prize is awarded annually to companies that create value, stability and jobs through their commitment to their region and beyond. 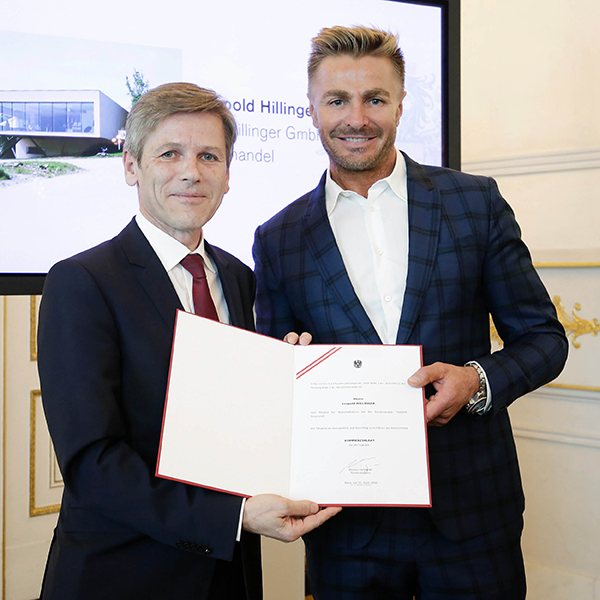 The nation of Austria honoured Leo Hillinger in 2016 with the title Councillor of Commerce. This professional title stands not only for successful business management, but above all for efforts to benefit the general public. Leo HILLINGER received it for his services to the Austrian republic and for his commitment ‘with passion’.

In addition, Leo Hillinger GmbH was honoured in 2017 with the ‘Superbrand Austria Award’ –- an award for which companies can neither apply nor register. Those awarded are selected by consumers and experts. And are officially recognised in Austria for being an innovative, successful brand.